On Wednesday night, the TV programs kept announcing powerful storms and possible tornadoes heading our way.  My daughter #2 called from the college and sirens were going off and she went to the gym-she lives in a trailer off campus.  We were worried about her!!  We lost power at 10 that night.  At 11 we heard she was okay, so instead of my husband and I going to the basement, we thought no tornado hits here-so we headed upstairs to bed and watched the sky lite up from the lightning.

Around 1 we heard hail and looked outside on our deck, but didn't seem like no big deal.

I received a phone call early on Thursday morning (from cell phone) that our school system was on a delay schedule-still no power-so I thought no big deal.  Later that morning I learned the news-6:30-that a tornado had touched down 5 miles from my house and another one touched down 3 miles from my house-I didn't hear anything, but a concerned neighbor was worried about us. They closed school in my area-due to the storms.

Cell phone quit working so I drove to check on my mother and brother who lives very close to the community where the tornado hit.

The roads were blocked and the policemen wouldn't let traffic through only if you were checking on a family member.
This is what I first saw. 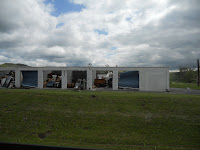 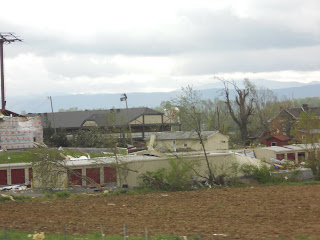 My heat was racing!!
Praise God my mother and brother was okay.
Many people were asleep and thinking -I guess the same thoughts I had -just a storm approaching and no big deal-but .....many lives were lost. 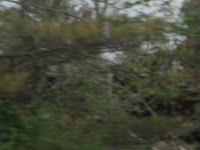 As I traveled back up the interstate with tears in my eyes-it was so hard to see the devastation all around.
A truck stop was completely demolished and tractor trailers were blown across the interstate. 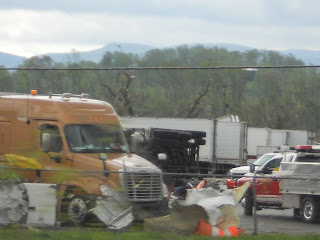 I have never witnessed such disaster.
Then I felt so guilty-I had complained earlier that morning about no electricity and cell phone service and here were people who had lost everything-homes and loved ones-who had been found in  fields from their homes.
So I went home and prayed for all victims and thanking God that he had spared my family.
We live in a very close knit community and so we will all pitch in to help-anyway we can.
Until then...please keep the community of Glade Spring, Virginia in prayers.
﻿
at April 30, 2011