Recall it as often as you wish, a happy memory never wears out.

What a great end to summer.  The last 'official' weekend of summer was spent attending two reunions.
The first reunion was 'Shaker Nation Reunion'.  My ole high school no longer exists in my mind.  My high school consolidated years after I graduated.  The name, colors, and mascot is no longer there.  I attended R.B. Worthy High School in Saltville, Va.  Our colors were maroon and gray and a salt shaker was our mascot.  Probably know from the town-Saltville-we were famous for the salt-especially during the Confederacy Army.  Many years later, Olin came to town and Saltville became a booming little town. In the 70's Olin was shut down-EPA came to town-much mercury, etc. Many people from Saltville relocated to find jobs and the town grew smaller and smaller. The school was consolidated and it is now Northwood High School-blue and white , and has a panther as a mascot.
It didn't take long hooking up with ole friends and reminiscing about the days we spent together. 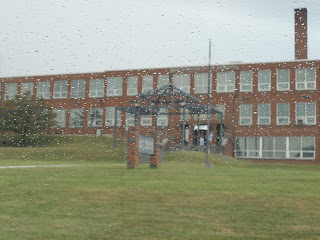 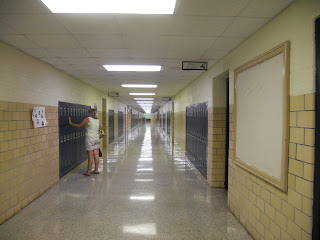 If these halls could talk.......Time slips by so fast.....It seemed like yesterday we were discussing the big Homecoming Football Games, outfits to wear, who was dating who, prom gowns, who had broken up, etc.
I even attended the parade.  Now people 'claim' to have found mammoth bones-so now the town celebrates 'Woolly Mammoth' to lead the parade. 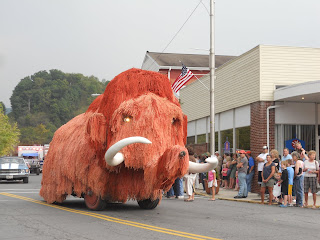 The song-"Woolly, Bully" plays as he makes his way down main street.
Before I realized it.....Time was slipping by and night fall came and time to say our good-byes, but I said-"See ya later" and I hope one day I will see all my school friends later.Life gives us brief moments with another...but sometimes in those brief moment we get memories that last a life time...


Sunday was another reunion. We attended the church I went to as a young girl. 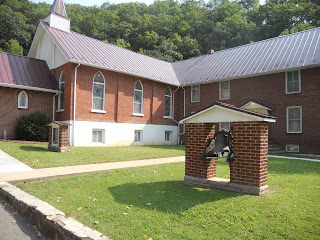 Such a good feeling-to return 'home.' 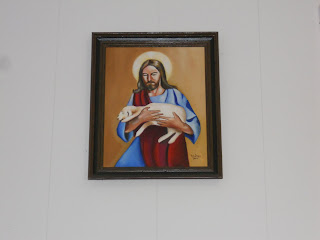 Picture still hangs in the same spot-that was painted and given to the church in memory of my wonderful father.  My dad loved children of all ages and was sooo cheated out of life when he passed away 27 years ago. Too many emotions---came to me and tears flowed. 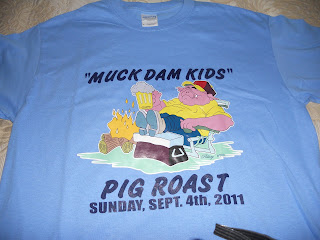 The name of the street I lived -real name was Perryville.  However, we lived on literally--muck.  In the early 20's the muck dam had burst and many lives were lost.  When Olin came to town-houses were built on top of the muck.  Yep--I lived on muck.  Now all the houses (which had to be 40) are torn down--EPA.  The houses were also built on top of each other, so if you were sitting on your front porch -your neighbors could hear every word you said.  The children all grew up as one big, happy family.  If one person didn't have his/her chores finished and we wanted to play-we all pitched in and helped.  Our famous game was-'kick-the-can.'  I don't reckon many kids today know how to play this.  We also took up for one another-if it was somone you dated and the rest of us didn't like him/her-well BEWARE!!!!  we let you know in no uncertain terms.  To this day, my husband still talks about how he was a little leery coming to see me in Perryville.  I think he was glad I went to college--haha.  All of us have now moved on and......time goes by. 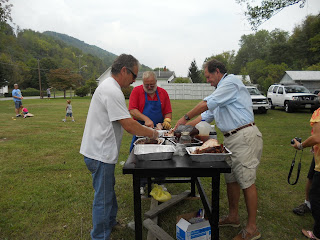 The men fixing up the 'pig.' 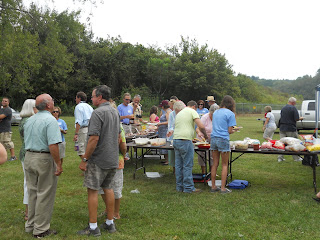 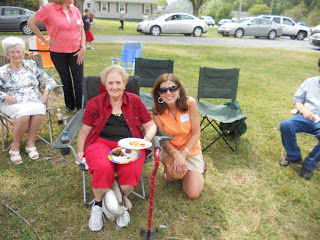 Mom and I enjoying our day. 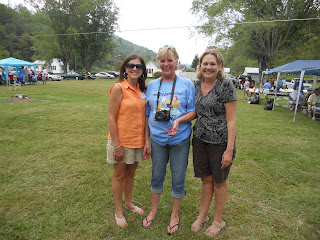 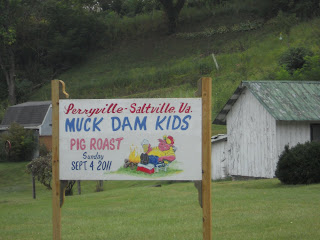 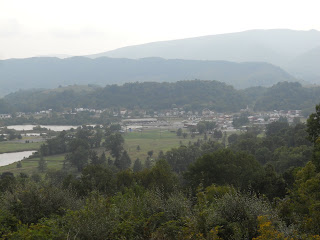 The small town of Saltville will always be special to me.  The saying--"You can never go back home" is true.  People and buildings do change.  But in the little town of Saltville, people do not change no matter where life has taken them or how far away they live.
Memories are the treasures that we keep locked deep within the storehouse of our souls, to keep our hearts warm when we are lonely.


As it rains today, I..........Always remember to slow down in life; live, breathe, and learn; take a look around you whenever you have time and never forget everything and every person that has the least place within your heart.