Oh What A Feeling!

Fall is in the air.  With temperatures dropping, fall is just around the corner at my house.  I have begun decorations for the Apple Festival which is this weekend. (another blog about this later). 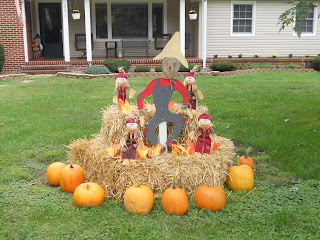 #2 Daughter called and wanted us to come to the football game on Saturday.  A chance to see one of my girls--a no brainer. It was going to be a big game and her basketball team was having to work concessions.  Emily working concessions--Right?????
I had kept grandson and of course I had to dress him in MY favorite outfit. 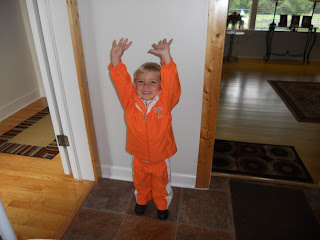 Go Vols!!!  Even though his dad is a huge Michigan fan.  Nate is telling his dad-give him six!
The game was between UVA-Wise and Emory/Henry.  The two colleges use to play one another and last year was the first time they had played each other in many years.  A huge rivalry between the schools.
Charlie and I knew we better leave early.  Trying to find a parking place was going to be tough let alone find our seats.  The stadium was packed.  Many fans tailgating and playing corn holes.  This game looked fun-hmmmm...I never played this in college and tailgating, I think I just went to the game and then to a fraternity house.  Anyway..... there was a chill in the air and one could sense the excitement and tension in the air.
Charlie and I quickly (well as quick as we could)went to  find our seats.  Then it was off to see daughter working in the concession stands.  This girl has never worked a day in her life until this summer!
Sure enough there she was....... 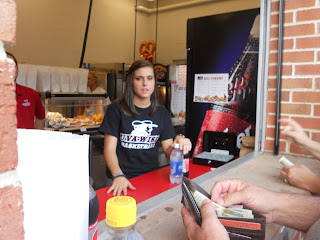 She didn't look that devastate!!  I only hope she can make change ...fast.  Fans have no patience at a football game.
I had to go to her window and order and when those big, brown eyes saw me--she said  Whew...no special order for this lady and if I didn't make my mind up soon I should leave.  Gosh!! how rude I replied-loudly and people behind me-switched lines. A Mom does know  how to give her daughter a break for a fast chit/chat. :)
What a game!!!  It went back and forth with both teams.  With 12 seconds left in the ballgame, the score was Emory/Henry 30 and UVA-Wise 27.  The fans were yelling and shouting-Emory had to punt the ball.  UVA-Wise caught the ball, the receiver was getting tripped up and he pitched the ball backwards---UVA player was in the right spot at the right time.  He caught the ball and scored!!!
The crowd roared!!!  UVA had won!!!!  Fans started running on the field.  I didn't move, I didn't want to get stomped on. 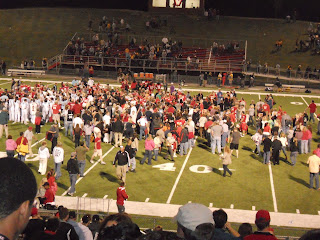 Final score--UVA-Wise 33 and Emory/Henry 30!!!  What a celebration had begun. A remarkably, unpredictably, shockingly, unbelievably finish. 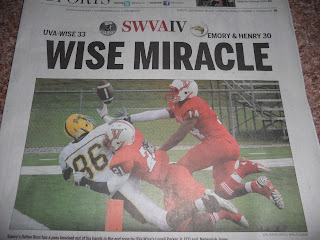 This is what football or any sport is all about.  As the saying goes....It's not over till the lady sings!!!
What a feeling!!!