Schools in my area were closed due to flooding then a snowstorm hit.

By Thursday morning, we had six inches of rain.  The weather report kept telling us the temperatures were going to drop and the rain would turn to snow.  Yeah, right?  That was my thinking.  One has to remember the weather report was usually wrong, and I took the report with a grain of salt.  The temperature on Thursday morning was very warm and the rain was falling.  I kept checking the basement for water and thankfully never saw any.  Sadly, this wasn't true for many of my neighbors.

Around 4 that evening, #2 daughter starts jumping up and down--ice pellets were falling from the sky.  Within a few minutes, the temperature had dropped drastically and an ice storm was happening.  Just a few minutes later, it had all turned to snow.  #1 daughter was in a town 20 minutes away --she was on her rotation-a mental hospital to be exact.  She couldn't get home.  Her father went to drive her home.  He was unable to get on the hill at the hospital.  A co-worker was able to take her to a nearby store where her dad was waiting on her.  A 20 minute drive home turned into a three hour drive.  I, being at home, was walking the floor and calling ever so often.  How did my parents keep their sanity without cell phones?  A joy of relief when hub and #2 daughter arrived safely home!

This is what I woke up to Friday morning.  A beautiful six/seven inches of snow.


After eating a huge breakfast, there is something about snow that makes me want to cook, we headed outside for some snow play.

One is never too old to play in the snow.  I was able to catch both daughters (ages 25 & 23) making a snowman. 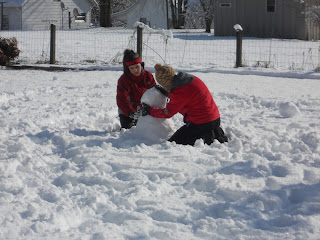 They worked tediously trying to build a snowman.

Then 'little man' wanted to run and play plus throw some snowballs. 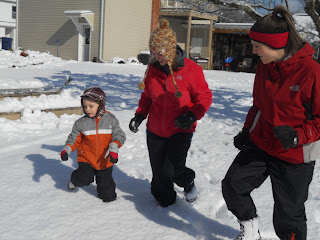 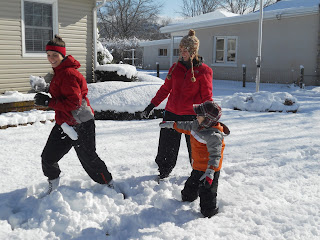 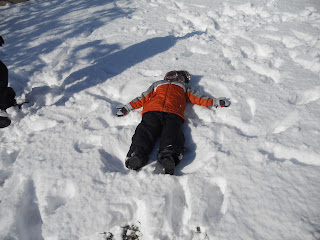 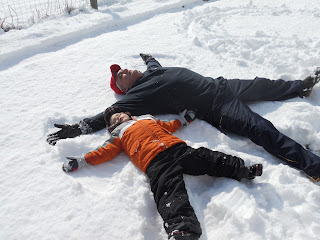 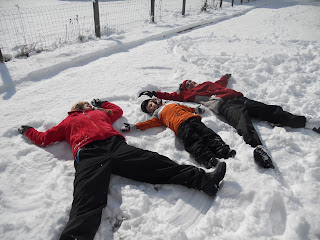 Nate decided he wanted to try and mow. 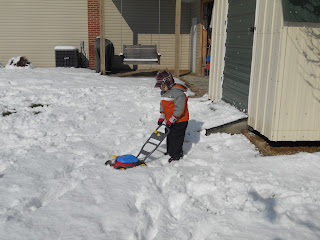 No way was the lawn mower going or making bubbles! 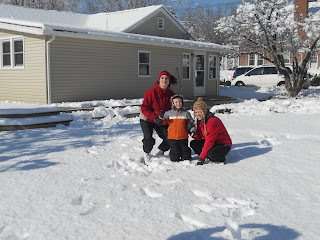 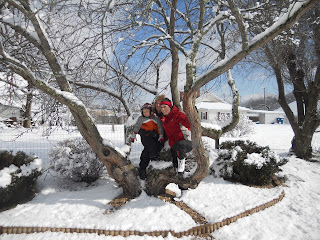 There are still many people in my area without power.  Hopefully by Tuesday evening all power will be restored.  I am sure these people didn't enjoy the snow like I did.

Saturday was spent watching my cousin play AAU Basketball.  It just seems like yesterday, I was watching #2 daughter play AAU.  Time sure doesn't wait on us.

A gorgeous, cloudless sky with plenty of sunshine has melted most of the snow.  Little Man shed a few tears on Sunday because of the sun melting the snow.  I had to do some explaining -the sun needs to melt the snow so we can go swimming when it gets warmer-this worked.

Have a great week and Enjoy Life no matter what curve balls life throws at us.
at January 21, 2013