September is a busy month for me.  Our community has had an Apple Festival for 68 years!  The only two year which we didn't celebrate the Apple Festival was in 2021!!  Our community was known for many apple orchards in the past. Hence, that is how the Apple Festival began.  The festival consists of many vendors (craft and food), a parade, a band competition, inside exhibits which consists of  awards given to Pre-K through 8th grade, 9-12th grade for their art, an adult art division, a baked good exhibits, a sewing exhibit, a canned food exhibit, an agrilcultural exhibit, a craft exhibit for Pre-K -12 th grade and for adults, a photography exhibit for 9-12th grade and for adults and a flower show exhibit.  I was chairperson of all the inside exhibits.  My work began in July preparing for this...counting ribbons to make sure there was enough for each award given to each category, getting judges, getting volunteers to walk around with the judges to place the ribbons on the exhibits, volunteers to help register the exhibits, and volunteers to sit and watch to make sure no one stole or damaged the exhibits. Isn't it a shame we live in a world where people want to steal or damage someone's hard work???  The festival is a three day event!

This year the festival was September 23rd -25th.  I began setting up the exhibits on Thursday in the library. Many of the committee members helped and we worked till past 7 that evening.  We were all so excited that the weather was going to be absolutely amazing....temps in the mid 70s.  You see, it is usually EXTREMELY hot or is is RAINING!  This year was going to be picture, weather perfect.

Friday morning, I was getting ready to go and meet the judges (I had a18 judges to judge the inside exhibits for each category and 2 people to walk around with each judge). My daughter calls me at 7:30 that morning telling me her hub is sick and she was coming and bringing grandsons to my house.  I usually keep the grandsons on Thursday and Friday, but daughter and hub knew well in advance this week I was unable to.  I left to meet all 54 people around 8:30.  The judging lasted a long time and I had given each judge and helper a gift for doing this for me.  I couldn't expect them to do this for nothing.  I was so pleased with the inside exhibits and how things were going smoothly.

I pulled in the driveway and daughter and grandsons were outside playing.  I could tell daughter was upset so I knew her hub had been tested for COVID and was positive.  Daughter and her boys decided to stay with me to avoid getting sick.  That Friday night, her oldest boy started not feeling well, Saturday morning one of the twins was sick, and Saturday afternoon, the other twins was sick.  So the parade was watched through my house windows.  By Sunday, we all were feeling rough.  I had to scrounge around and find someone to distribute the ribbons to the winners and a bunch of other stuff that needed to be done to close out the inside exhibits.  Shew!!  it was stressful.  But you know what, it all worked out thanks to many people who came to my aid.

This was the first Apple Festival I had missed in 41 years.  I was a little 'sad' but things happen we can't control.

But seeing the boys with their winning pumpkins and peppers made me smile. 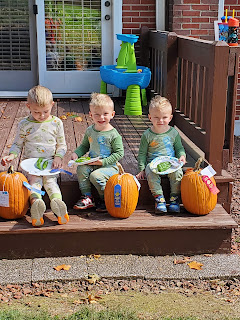