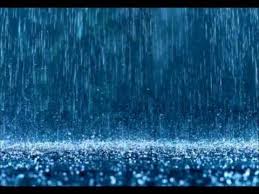 The rain began on Thursday night.  Friday morning it was still raining.  I ran to the store-between the downpours to pick up a few items. Thankfully, I stayed somewhat dry.  We haven't had much rain this summer, so we are catching up.

Friday, was daughter's bridal pictures.  Her hair/nail appointment was at 3 and pictures at 6.  The rain kept coming and coming down.  Not only was daughter upset due to the weather, but her hair appointment that was scheduled at 3 lasted until 5:50!  Which left 10 minutes to do make-up and get to the place for pictures.  No way could we make this work!!
So I began calling the photographer and explained the hair situation....and the photographer was super, super understanding...then I proceeded to call the lady who was doing make-up and explaining the hold -up and she was also super, super understanding.  As a matter of fact, both the photographer and the make-up artist just laughed and said to tell Emily not to panic this stuff happens all the time!  I tried to reassure daughter all was okay and not to panic and to quit shaking!!  The rain proceeded to come down in sheets and downpours! not helping the situation at all.

Just as we were about to go in for pictures, the rain stopped!!  (God was smiling, I know it)  Since the ground was completely soaked and soggy, pictures were made inside a cabin.  At first, I was skeptical, but the photographer was not.  She was able to do so much inside the cabin.  I must say my daughter was absolutely beautiful!  I didn't cry maybe it was because of the rain, or maybe it was because we were way, way behind our scheduled appointment, I don't know.  Pictures lasted for a couple of hours, and we finally made it home a little after 9 that evening and it was still pouring rain!  Hub did text quite frequently wondering when we would be finished with pics and to tell me he was hungry. Men just don't understand all the wedding stuff, sigh.

Friday was also my birthday!!  So, I have a hard time eating a late dinner, so I grabbed a pack of crackers and a bag of chips and chowed down!!  Daughter kept apologizing for the lateness, and I know she felt terribly sad but heck things happen and you just have to roll with it.

More rain on Saturday!!  Hub planned on grilling out and I tried to talk him out of it but no avail.  The sky cleared that evening and hub couldn't wait to tell me he was right (the rain would stop) and I was wrong.  He began grilling and within 15 minutes the downpour came.  Our grill is covered and hub was having the time of his life in the rain,  I, on the other hand, didn't like the rain at all and was not happy about it.  After dinner, the rain did stop.  Hub and I walked to a friend's house to watch the fireworks.  With all the rain, I was surprised the fireworks were still happening!

Hub and I like to sit out at night and talk. Here lately, this is the only chance we really have.  I do most of the talking and he mainly listens.  After I rant a little, he begins his rant.  It was close to midnight and all of a sudden I hear this child screaming and this couple cursing.  I thought to myself, I am not hearing right.  The screaming and cursing continued...so I began walking up the street to see what on earth was going on.  Quick as I began walking here came the police and an ambulance.  The cursing ceased but the screaming continued.  A little girl was sick and she was taken to the hospital.  Where was the cursing coming from??  Another couple a few houses down had partaked too much to drink and were arguing...hum the cursing.  I think the police scared this couple and the cursing stopped!  Hub asked when I returned what did I think I could do and I politely said I didn't know but the screaming was awful and the cursing was worse and I just needed to see what on earth was happening...hub replied I was crazy. Afterwards I thought the same thing, but I would never tell him that.

Rain continued through the night and on Sunday more rain.  After church, we took both grandsons to Chuck E. Cheese...Both boys had a good time and I did, too. I feel sorry for both boys with the life style they see and whenever I can I try to get them away.  Again, my heart is heavy and I wish there was something I could do but I can't.  I know hub stays upset constantly about his son's behavior and I really don't say much about it. I just tell hub I pray every night for God to keep both boys safe.

It is still raining-HARD but tomorrow is another day!