September has come and gone and where did it go??

The beginning of September I began staining my deck.  Hub had replaced the deck last year and I was told that I needed to stain it.  I was told this in May so the first of September I tackled this project.  Shew!!!  the deck wasn't so bad but all the railing....now that was a different story.

I also began trimming my hedges....yep I was told this needed to be taken care of before fall...so I started this job.  It was soo hot that day.  I remember this day like yesterday.  September 12th to be exact.  I had just come in the house to grab a cool drink because it was extremely hot.  #2 daughter called and asked where I was.  I told her I was trimming the hedges and she replied..."No you're not."  Which I then said...well, I just came in the house to grab a cool drink...I am dying it is so hot.  No sooner had I spoken those words when I caught a glimpse of #2 daughter's hub walking around toward the back of the house.  My mind began racing...now grandson just started going to a babysitter in August ( I kept him for 19 months) and I began thinking the worst...grandson had fallen, grandson was sick, etc.  I quickly went outside.  Emily (#2 daughter) was standing beside her hub.  She was smiling...They came to tell me she was pregnant.  I yelled....Yeah!!  Then they proceeded to tell me she was pregnant with TWINS!  What?  Did you say twins?!  So twins it is...due date is April but the doctors are telling her she will deliver early.  Right now, the doctors are saying they are identical twin boys.  As long as daughter and babies are healthy...I don't care about the sex. 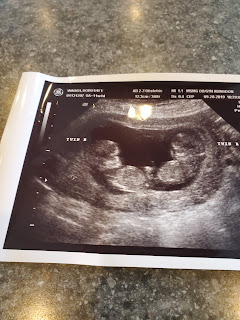 The following week, #2 daughter's hub had to go to Las Vegas for a business trip. ( I could handle that business trip.)   Emily asked if I would spend the week with her and help her with Blake.  Gosh..don't even ask...I was thrilled.  Although, I must admit, I had forgotten how tiresome it is to keep up with a 20 month old toddler boy.  I enjoyed giving him a bath and tucking him in at night...but I was ready for bed too!  I had made plans in the summer to attend my sorority reunion and was leaving that Friday so #1 daughter, Amanda, spent the night so I could carry on with my plans.  Emily's hub arrived home Saturday morning.

My sorority reunion was a blast!  My college roommate and I shared a room together that weekend.  It was so much fun.  We attended the cocktail hour that Friday evening.  On Saturday we went to a brunch, tailgate meal, and watched the football game. 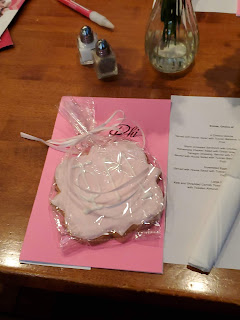 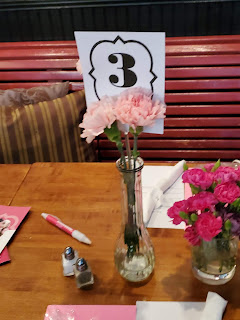 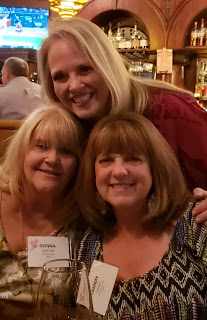 Such a fun weekend!!

The next week was going to be a busy one.  #2 daughter's hub had to be in New Jersey plus it was Apple Festival Weekend in my town.  Apple Festival is celebrated every year in September...the last weekend in September.  This festival has been going on for 50 years.  The festival includes a craft fair, many food vendors, a parade, a pet show, art shows, and a band competition.  I knew this was going to be a busy week.  The weather was extremely hot and I do believe this is one reason the crowd was down from previous years.  #1 daughter entered a float in the parade/competition and placed second..Yeah! 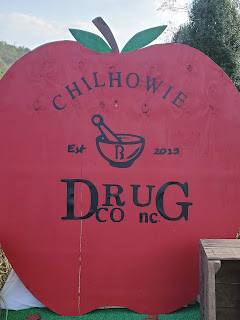 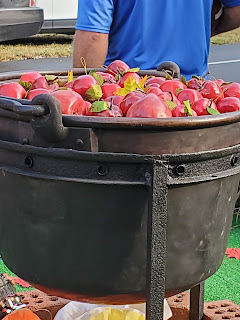 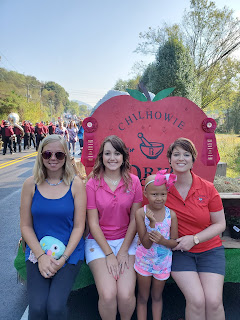 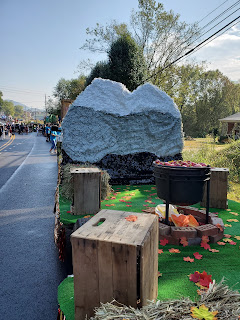 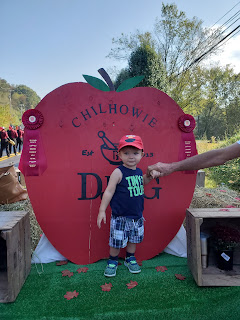 The festival is a three day event.  All seemed to enjoy the festival.

The following week, that Monday to be exact, I was just chillin at the house.  #2 daughter calls and her hub was very sick.  His temp was 103 and he was aching all over.  She and grandson wanted to come to my house; her husband was going to the doctor the next day.  I still had Blake's bed as a baby bed; they (daughter and hub) had changed his bed at his house to a toddler bed.  The first night, Blake was not a happy camper.  He wanted in his toddler bed and it was a very rough night.  Shew!  The next day his bed was changed to a toddler bed!!  A piece of cake for the remainder of the week.  Her husband didn't have the flu; doctors called it a virus.  His temperature finally broke that following Friday and he began to feel better.

So the month of September is kinda a blur....a lot was happening.

Here it is the middle of October!!!   The weather is beginning to feel more like fall...temps cooler in the mornings and evenings now.  I have started back walking in the afternoons, something I missed during the month of September and I plan on going to my Pound Exercise class this Thursday...something I haven't been to in a while.


After having this little man around... 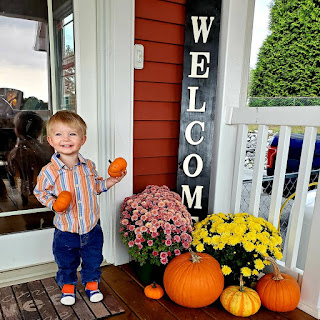