The weekend started off dreary and rainy but ended on a high note-bright sunshine.

The school I currently teach at was celebrating homecoming activities.  I kinda like some of the dress-up days we had--Squad Day, Character/Super Hero, Jock/Nerd/ Throwback Thursday-it was neat seeing the kiddos dress and of course the faculty dressed up as well.  It was a beautiful week-sunshine and warm temps one would have thought we were in the month of May, not October.  Friday, the rain/storms blew in--ugh!  Our football game was cancelled and will be played tomorrow night-Yep on a school night-need I say more.

Before the storms came, the sun was shining.  It had been raining so the football field was muddy and since it was Homecoming I am glad no one (especially the girls) had to trudge across that muddy field.  I had grandson (he wanted to spend the night even though the football was cancelled and his dad would be home) and we headed out to a nearby town to pick up a few items.  The sky was cloudy, but it was still warm outside.  We got our few items and I stopped to get Grandson something to eat-Drive-thru.  As we were leaving the drive-thru it was like the clouds opened up.  The rain was coming down hard, the wind was blowing, and lightening was dancing across the sky.  I had great difficulty driving so I pulled into a store parking lot.  The rain was pelting the windshield so hard I thought the glass was going to break. I called hub to let him know Grandson and I were parked waiting on the rain to let up.  The rain did let up after awhile and Grandson and I make it safely home.  I was a little shaky but thankfully we had made it home safe and sound.

Saturday was rainy and dreary.  I was able to do some inside cleaning and some laundry.  Hub called and said daughter and her hub were coming down.  I made a big pot of homemade chili-good for a rainy day.  I love smelling chili cook but the aroma hangs around more than I like so I fired up some pumpkin candles.  Grandson was happy his aunt and Kenneth were coming.  He celebrated a birthday earlier in the week and he was of course wanting his presents. When daughter and Kenneth arrived they were both grinning from ear to ear.  I couldn't figure out why but when they took off their rain coats, I saw something brown underneath.  They had gotten a new puppy!  Daughter said she had been working with babies for the past few weeks in PT and she was thinking about having one but Kenneth decided to get her a puppy instead.  Good thinking, Kenneth!  The new puppy, Champ, is a boxer and he is so adorable.  :)

Sunday was a gorgeous day.  We headed out to the pumpkin patch. 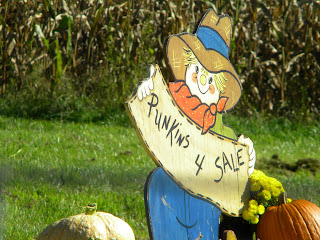 The leaves are beginning to change. 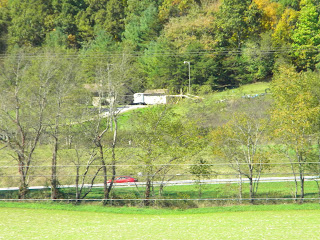 Pretty soon this mountain side will be beautiful.  I do live in a pretty part of the U.S. 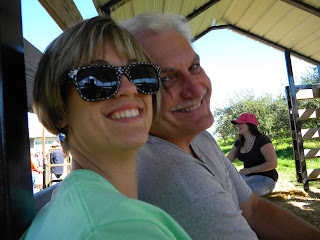 Hub and #1 daughter did enjoy the hayride. 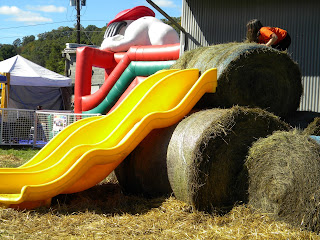 Kiddos did enjoy the hay slide.
and I did get a pumpkin.  Such a beautiful day.
A perfect way to end a weekend.

Hub has a doctor appointment tomorrow with his oncologist, so whisper a prayer for continue health.