I should have stayed in bed.....
Thursday I overslept and I had so much to do.  I hate that feeling-oversleept  and can't get caught up for the day.  Always running behind.

Still rushing around I almost forgot grandson's babysitter's birthday.   Quickly I went and picked up some flowers, card, and gift card.  I went to pick up grandson and deliver her gifts.  Now his babysitters is 81 years old.  She is remarkable for her age.  She was surprised to see the gifts.  But  I was more surprised when she said, "Tammy my birthday is next month not June 28 but July 28."  OMG--I wanted to crawl in a hole.

Woke up all time Friday!!  Hub and I went walking, and I trippped on the sidewalk.  I think I almost fell for 5 minutes.  You know the dance one has to keep from falling-that was me.  Hub did congratulate me on how I kept from falling-he admired my quicknesss and coordination.  Whew-thankfully no one was around.  How can one fall gracefully?  Should I have stayed in bed?

Storms rolled in Friday night.  We were sitting on the front porch and the wind started howling.  This happened all at once.  The neighbor's tree was hitting the power lines and then we heard a BOOM!  The neighbor's acrossed the street had lost power.  The tree was catching on fire from the power lines and the wind was picking up speed.  The temperature was still in the high 80's at 11 that night.  No rain fell just windy.  Finally, the wind ceased and the clean up began to help get the trees up.
Power was restored Saturday morning, and I know all was thankfull because the temperature hit 106!

No storms were forcasted for Sunday, But......as I was sitting down in church the lights went out.  Our preacher announced if anyone had windows down to go and roll them up.  I quickly ran to check on daughter-she had the 3 & 4 year old children in Wee Worship.  I explained to her to keep them in there and away from the windows.  Here came the wind again....  I stayed with Wee Worship children all 15 of them to help daughter out.  The kids were GREAT!!!  They weren't scared at all, just kept on playing, eating, and worshiping God through it all.  How amazing!!  The wind had ceased, but still no power.

On our way home from church, I was in shock.  There were so many large trees down!!  The entire town of Chilhowie had no electricity.  The temperature in the vehicle said 74-how refreshing.  Hub called around other towns to see if restaurants were open.  We headed to Bristol to grab some lunch.  After eating lunch, the teperature had climbed to 96 degrees.  When we got home, still no electricity.  Why is it when the electricity goes off, one has to open the refrigerator and grab a drink?  I had daughters on the way home, if no power-don't open refrigerator.  What happens-quick as the door is open-they both head to the refrigerator!!

Grandson knew how to cool off-he headed toward the sprinkle. 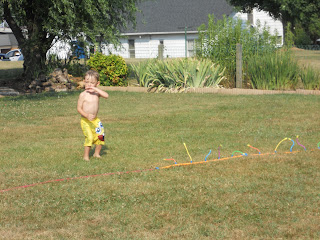 Thankfull to AEP-our power company-the power was restored at 5 that evening to our house.
At 11 that night there were still thousands still without power and some trees had fallen on homes.  I was so thankful.

At midnight the storms came again.  Rougher than before.  Grandson was sleeping and I could hear the windows shaking through the monitor.  The sky was a giant light.  The rain came!!! Thankful  for the rain.  Our lawn hasn't been mowed in two weeks-now going on three!!  You walk on the lawn and the grass is like dirt.  Hub and I watched the storm through the closed in deck.  Gosh I have never seen lightning like this--a constant, and the trees were bending to the ground.  Our flagpole started swaying and I just hoped it wouldn't fall over.  Loud thunder rattled every window.  Glad it only last 30 minutes.  Hopefully no more storms.....for a while.....At around 4 am here came the storms again.....not as bad as earlier, but still scary.

I was thanful to see the sun this morning....