Oh Gosh!!  It has been over a month since I have blogged..
Either my life has been too boring or too busy....I am going to go with something in between! 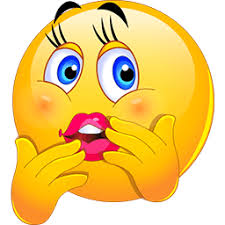 This was the first Valentine's Day without my dear hub, Charlie.  Now Charlie and I really didn't celebrate big on this day....maybe a dinner somewhere but nothing too extravagant. I didn't give the day a lot of thought because I vowed not to look on Facebook at all the pictures of lovers, the flowers one received, the jewelry others received, or reading about where their spouses were taken them for dinner....I told myself don't look at Facebook.  That morning, I was sitting in the den with my grandson, Blake, who I keep and there was a knock at the door.  It was around 10:30ish...so I figured it was someone selling something.  When I opened the door there was a young man, who I go to church with, dressed up in a suit holding a single red rose and a Valentine balloon. With tears in my eyes, I invited him in...He said he knew this was my first Valentine's Day without my hub and this rose and balloon was just a small gesture to help me know I was loved.  Oh My!!  more tears....  We talked for awhile and then he left. 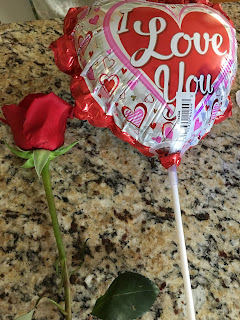 How thoughtful this was of this young man ( I taught him in school a few years ago).  He has a beautiful wife and yet he thought of me on this day.  Later I found out, he visited all the widows from our church that day with the same gifts.  Such a fine man INDEED!!

My late husband was on the Town Council.  I was appointed to take his seat until the election which was held this past Tuesday.  I had decided to run for his seat...some courage on my part since I have never ran for anything in my life...Courage was my word for 2019.  I lost the election by 2 votes!!  Many people felt sorry for my loss, but I am okay, I really am!

My oldest daughter had her cardiologist appointment at UVA a few weeks ago.  She has had THREE open heart surgeries....the last surgery she had her mitral valve replaced.  She decided to go with a mechanical valve...her decision completely.  She had a great check-up.  Her cardiologist was well pleased with her...next appointment is next year. :)

I went back to Zumba last week and it nearly killed me.  I had been going to Zumba, but with hub's sickness (Cancer) and then his death, I didn't feel like going every week.  Last week was the first in a few months....and I felt every pain!!!  I did feel better....just hard to sit down...my legs were so sore.

The weather has been up and down...some snow, some rain, and some sunshine.  Today is beautiful and the sun is shining.

My little man is growing up...leaps and bounds.  He will be going to a small day care beginning in August.  His mom wanted to wait another year, but the lady has an opening in August and she will not have another opening for TWO more years.  I told daughter she better sign him up and not wait.  I love keeping him, but little man needs to be around other kiddos. 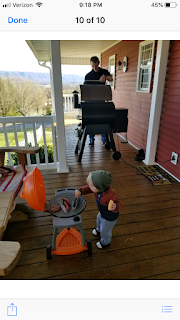 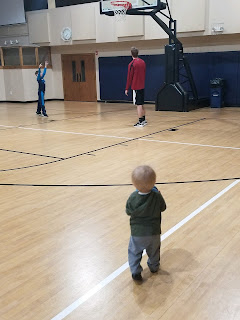 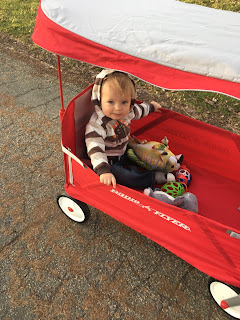 He loves being outside!!

Have a great week....
Until next time....Enjoy Life