Grandson absolutely loves wrestling.  He knows the name of  each wrestler, and he even knows how much each one weighs. My step-son's mother had gotten him and grandson tickets for WWE-wrestling for Christmas. He and grandson left last Sunday for Ohio for Monday Night Raw.  Being a retired teacher, I was a little upset-grandson was missing two days of school!  No way should this happen, but hub assured me it would be okay in the long run.... and it was...as it turned out grandson only missed one day of school.  I was relieved they made it home before the snow came.

With temperatures in the 70's in the month of December, most people was saying what a mild winter we were having.  It did seem odd not wearing a jacket on Christmas and everyone out and about in short sleeves.  But winter did come for us last Sunday.

Last Sunday, the temperatures dropped to single digits and a little snow fell. Wednesday, we saw what I like to call -the Junior Varsity Snow--about three-four inches fell. I had run to the store to pick up a few things-drinks and snacks mainly, and I was ready to hunker down. Thursday evening the Varsity Snow hit-around 12 inches. There is something about snow that makes me feel like a kid again.  Even though it was cold, I put on every layer of clothing I could get on and still be able to move and ventured outside.  There is something magical in the air when the snow is falling.  Hub thinks I am crazy-wanting to go outside.  Not wanting to be that 'crazy lady' outside, I decided to do a little shoveling...even though it was still snowing.  Just the quietness and beauty of that first snowfall is so serene.

Friday, I shoveled out some more and then did some baking.  It began sleeting-which I don't like-snow yes but no sleet.  I kept praying that we would not lose power as I was fixing soup. Many businesses (banks, doctor offices,etc) began closing early.  I phoned daughter to make sure she was okay and she had also decided to close early.  Good thinking on her part.  Driving in sleet is not easy.  I invited daughter to stop by and eat but she declined saying all she wanted to do was go home and soak in a hot tub.  I kept listening to the sleet hit the windows and prayed all would be okay.  Thankfully our electricity stayed on.

Saturday, I had cabin fever.  I shoveled some more-with help of some neighbors, and hub and I ventured out.  I needed to go riding-just checking the roads..then hub and I headed to the grocery store to pick up a few things. To my surprise, there was not any milk in any of the three stores I went in.   I could not imagine this...but all was well.  I kinda like orange juice over my cereal so I can pick up some milk another day. Hub sneered his nose on this little suggestion.

Hub, daughter, and I drove up to Christianburg on Sunday to visit other daughter and her hub.  They also had cabin fever.  We all went out to eat and just enjoyed some ole time conversation.  It was funny listening to daughter and hub explain how their two dogs didn't like the snow...they simply had a hard time running/playing in the snow because it came up to both of their dogs' bellies. A great evening.

The first snow of the year is magical and I enjoyed venturing out and having fun. 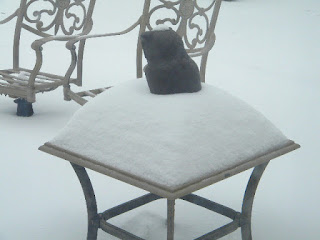 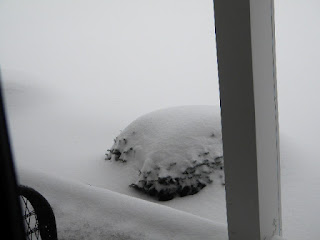 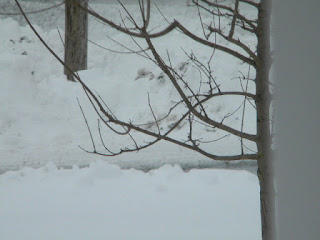 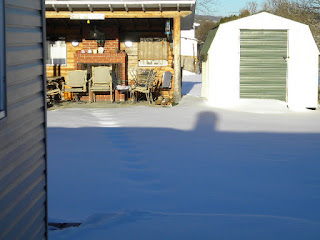 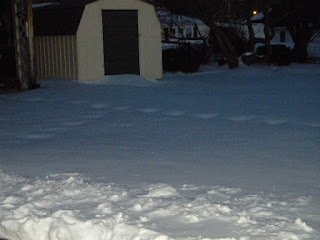 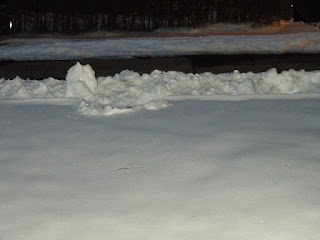 Now I am ready for spring.